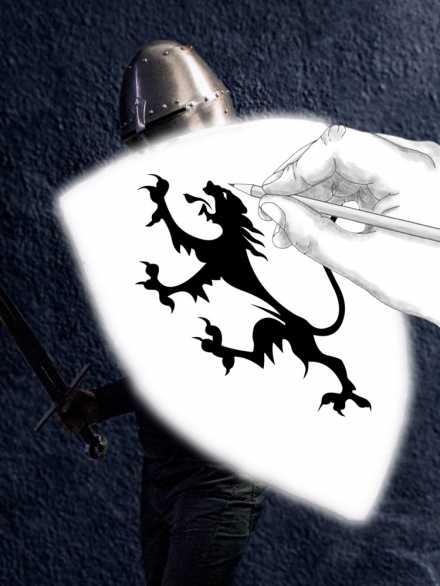 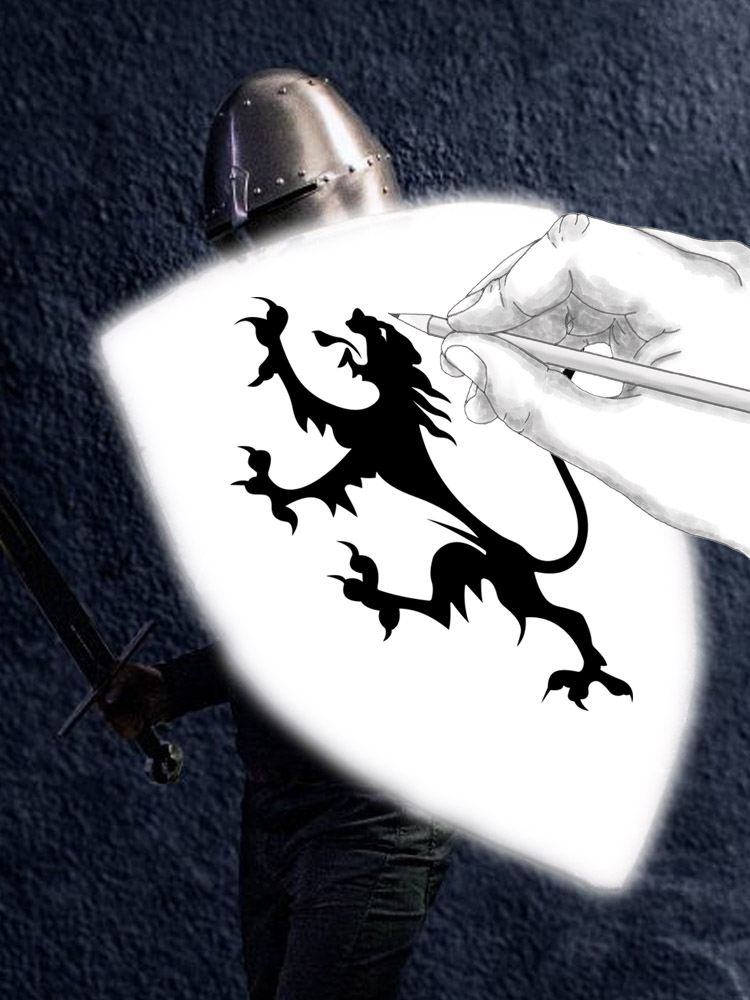 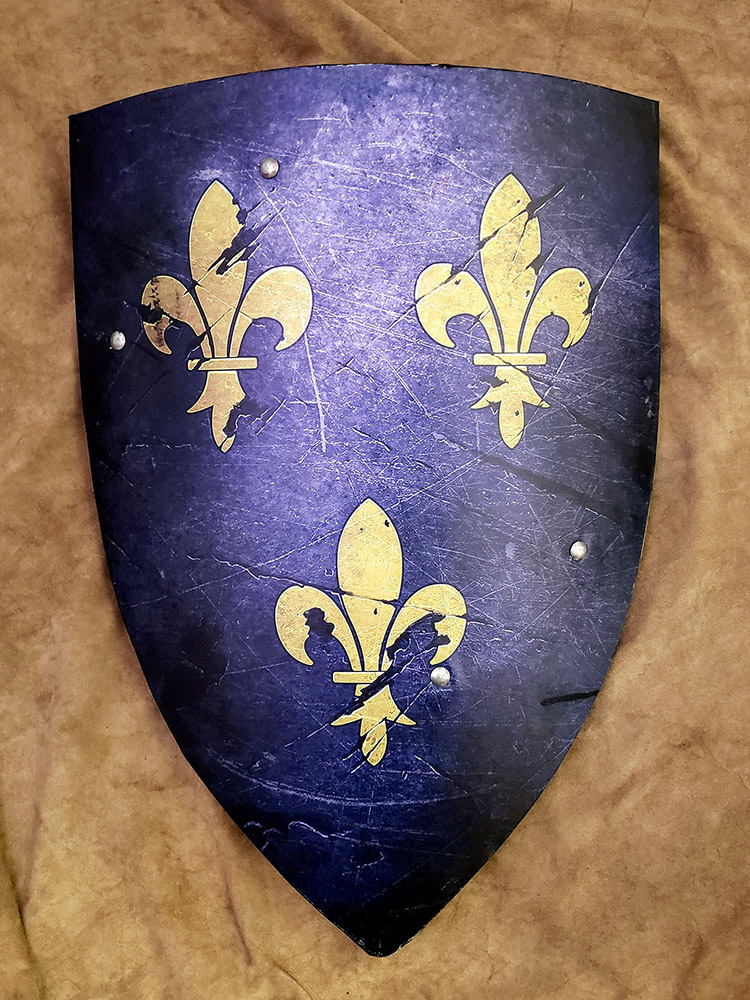 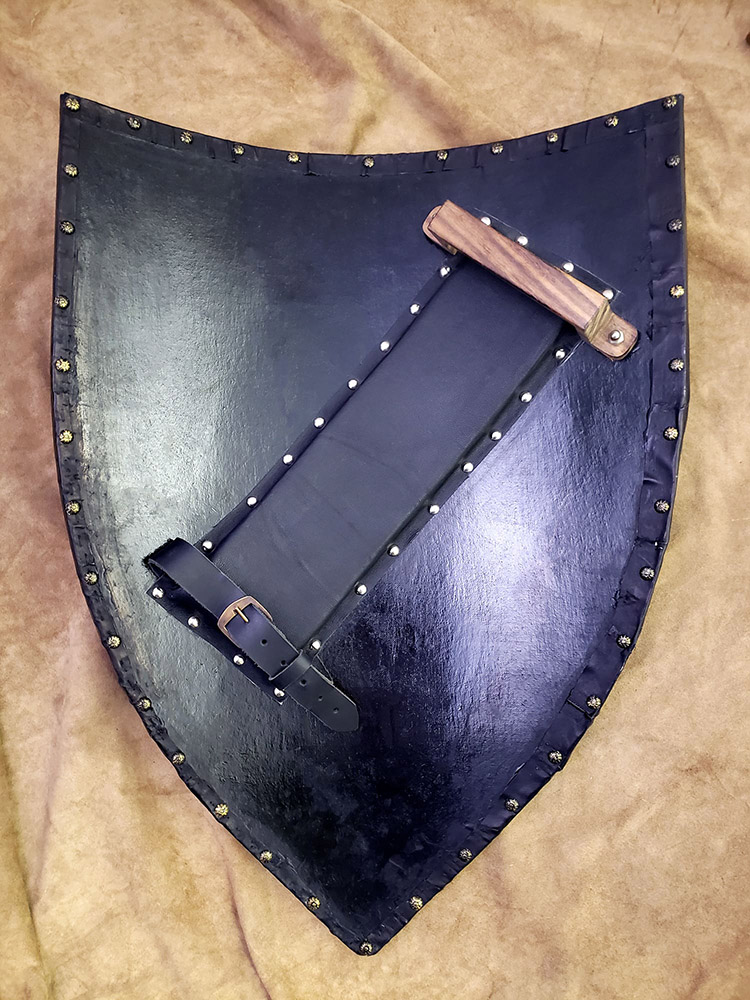 $400.00
This item is currently out of stock. If you would like us to email you when it is back in stock, send along your email address...

Want DSA to make a custom shield of your design or with your family crest on it? To be able to make it work, we need from you a 300 dpi format 21.333" wide by 26.458" in height. As long as it fits within these format restrictions, we can bring it to life for you. If you do not have a suitable file, there are several sites online that offer free heraldic art, or you can contact someone like Brian Abshier who does 300 dpi original medieval style heraldic artwork.

Once you have a design selected, place your order and attach the file you wish to use to your receipt. If you have any questions please contact us BEFORE placing your order.

Please note that due to their nature, there are no refunds or returns on custom made items. Click here for more information on our return policies and customer satisfaction guarantees.

The form and function of the shield in medieval history is, like many other aspects of war, a story of evolution. As weapons increased in deadliness and versatility due to improvements in construction and materials, so too did the methods that we used to protect ourselves from those weapons. Many weapons were single-handed by design, which led to a natural use of the off-hand as a means of defense. The shield – a wooden or metal object gripped in the off-hand or strapped to the arm – could protect the user from slashing blades, crushing blows, even arrows. In many battles, having a well-made shield was as important as having a good weapon – if not more so. In countless cultures around the world, shields in one form or another make an appearance.

Early shields used by the Greeks and Romans were precursors of the medieval shield, and a variety of designs were utilized depending on the role of the soldier. Most famous of these was the scutum, the curved, rectangular shield of the Roman Legions. Both art and pop culture frequently depict Roman legions marching in ranks, holding their shields before them, moving as a single, perfect military unit.

Vikings, too, engaged in a form of combat that revolved around the use of a shield. Viking shields were typically round and made of wooden planks, with a central metal boss that protected the hand. For Vikings, the shield was a weapon as well – and when edged with metal, could be devastating when punched into an opponent’s face. Even when not being used to bludgeon enemies, the Viking shield was an effective and mobile tool for defense, allowing a Viking warrior to quickly strike and then retreat back to protection. Vikings would also paint symbols and spells on their shields – for protection, for guidance, and for prowess in battle.

Descendants of the Vikings (via the “aggressive settling” of Normandy) continued to develop the shield as weapons and combat in Europe evolved. Mounted combat, especially mounted combat using lances, combined with traditional round shields resulted in a mostly unprotected left flank. By extending the shield into an almond or a leaf shape, mounted fighters could protect themselves more effectively. The use of these shields became popular during the 11th century and was frequently depicted in art. They became so widely used that the First Crusade brought with it a veritable flood of kite shields – which influenced the design and use of shields throughout the middle east for centuries.

What evolved from the Norman kite shield was what later became known as the medieval heater shield. As armor became more effective, shields could become smaller and more agile. The heater shields (later named this due to its resemblance to a clothes iron) were thus designed with mobility in mind. They could be used mounted or on foot and were thus incredibly versatile – both armored knights and footmen could pick up and incorporate a heater shield into their different roles. The heater shield was typically constructed from layers of thin wood in a curved triangle shape that maximized surface area (and therefore protection), covered in leather or canvas. These could be incredibly affordable, which meant they could be carried by both nobles and common soldiers.

As each shield is made to order, please allow 4 weeks for completion.

SHIELD USE: Hold wooden handle and strap shield to forearm for the ultimate in medieval close combat protection.
Compound (16) layer of wood, each individually shaped and pressed for durability. The compounded layers not only ads durability in comparison to a single, thicker layer, but also provides greater strength with lesser weight. Each layer is soaked and individually pressed to shape, eventually creating one solid defensive wall. Covered in heavy cotton. Decorative rivets are set and topped off with a wood grip, closed cell foam backing covered in full grain leather, and adjustable forearm strap.
IMPORTANT NOTE: A recent increase in orders has resulted in wait times of 3-4 weeks to process and ship new orders on top of standard processing time.
FREE SHIPPING to the USA and Canada from Manufacturers warehouse in Quebec, Canada via Fed Ex. Please allow up to a week for sharpening and shipping. We apologize for the inconvenience, but due to the extreme shipping costs Darksword Armory swords can no longer be shipped to non USA or Canadian addresses.

Payments made on custom orders are non refundable and cannot be cancelled once work has commenced as they are made to order to YOUR personal tastes and the expenses incurred making it are non refundable to us as well. If there is a problem with your custom order we will work with you to provide a fair and satisfactory outcome, up to and including remaking the sword and in general going the extra mile to ensure that at the end of it all, you are pleased with your purchase. Click here for more info on our guarantees