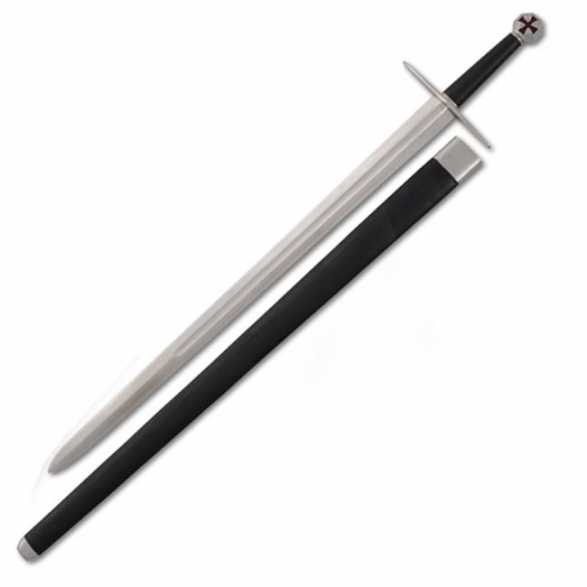 Rarely stocked classics made by Legacy Arms (formerly known as Generation 2/Gen 2) - this functional replica with Cross adorned pommel is a tribute to the powerful Order of the Temple which reigned for some 200 years. Inspirational piece.

Knights Templar or the Order of the Temple (French: Ordre du Temple or Templiers), were among the most famous of the Western Christian military orders. The organization existed for approximately two centuries in the Middle Ages. It was founded in the aftermath of the First Crusade of 1096, to ensure the safety of the many Europeans who made the pilgrimage to Jerusalem after its conquest.

Officially endorsed by the Roman Catholic Church in 1129, the Order became a favored charity across Europe and grew rapidly in membership and power. Templar knights in their distinctive white mantles with red cross were among the best fighting units of the Crusades. Non-combatant members of the Order managed a large economic infrastructure throughout Christendom, inventing or adapting many financial techniques that were an early form of banking, and building many fortifications across Europe and the Holy Land.

The Templars' success was tied closely to the Crusades; when the Crusaders suffered defeat and lost the Holy Land, support for the Order faded. Rumors about the Templars' secret initiation ceremony created mistrust, and King Philip IV of France, deeply in debt to the Order, began pressuring Pope Clement V to take action. In 1307, King Philip had many of the Order's members in France arrested, tortured into giving false confessions, and burned at the stake. In 1312, Pope Clement V, under continuing pressure from King Philip, disbanded the Order. The abrupt disappearance of a major part of the European infrastructure gave rise to speculation and legends, which have kept the "Templar" name alive until the present.

ABOUT LEGACY ARMS
Legacy Arms, formerly known as Generation 2, still leads the way in the affordable sword market creating tough, well made items for the Medieval Sword enthusiast. All blades are tempered 5160 steel with a robust apple-seed edge. The hilt construction is typically in steel (passing the magnet test) unless otherwise noted and the grips are leather over wood. The tangs are peened over the pommel the traditional way for maximum overall strength. The fit and finish of these swords from Legacy Arms is quite impressive, and would be at twice the price! Made with pride in the Philippines using anvil, fire and good old muscle power.