A rare opportunity to own a bit of SBG history with this collaboration between Forge Direct & Jeffrey R. Robinson.

A rare opportunity to get your hands on a piece of SBG history - this sword is part of the Legendary Swords Project. The blade is high end Feathersteel with differentially hardened edges made by master smiths and mounted in original hand cast and hand finished bronze fittings by Jeffrey J. Robinson in the USA. 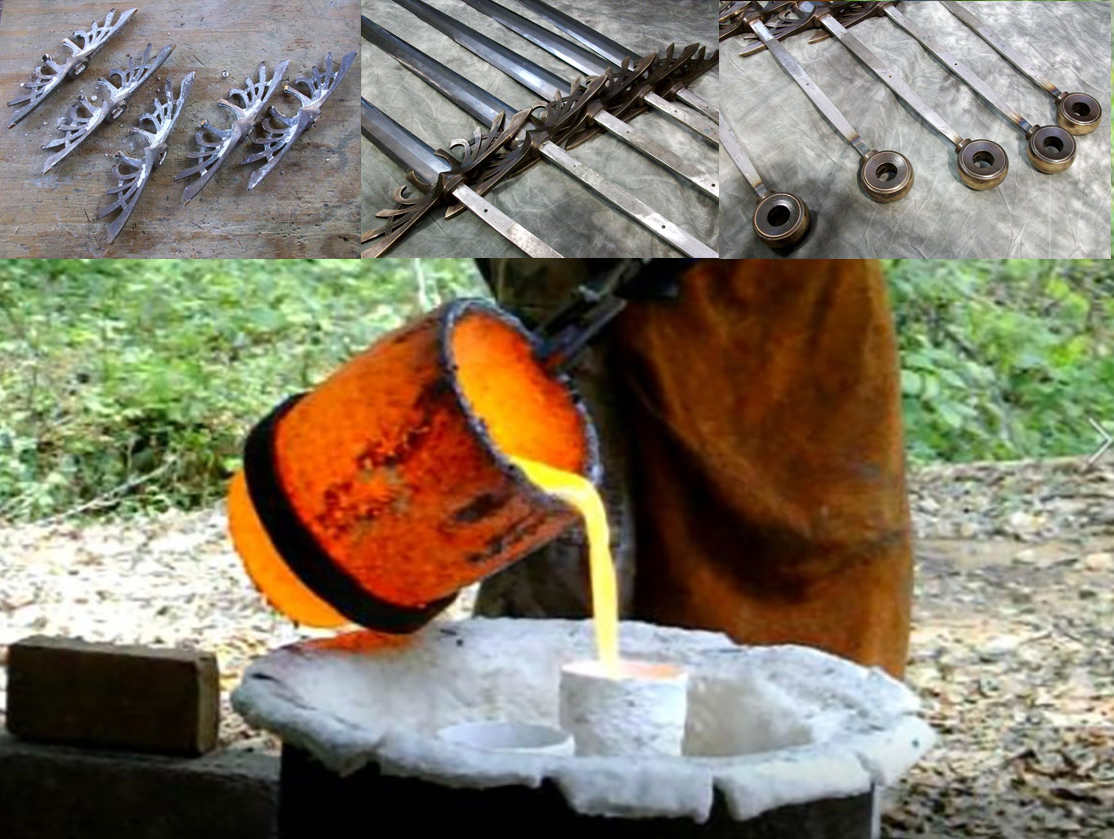 Here we use a Master Smith Forged Feathersteel blade to properly compliment the pedigree of the fittings. These blades cost between $1000 to $2000 (for example, we sell one called the Longevity Feathersteel here for $1999) and have the highly desirable Octagonal blade cross sectional geometry, making them extremely sturdy (we tested a similar Windsteel Jian on a wooden Viking shield and it tore it into pieces without damaging the blade - see the video tab to watch a Windsteel Blade in action).

THE LEGEND - the recountal of the Seraphim

Long ago, in the age after the creation but before the fall, we lived in light and splendor. We knew no suffering or distress and felt only the warm embrace of the radiance which surrounded us. All was solace and serenity.

In time though, there would be one among us within whom grew the barbed seeds of envy and pride. Fealty to the light pricked at him like a nettle in his mind. He would not serve and sought the dominion he believed was his due.

An insurrection was mounted. And so each had to choose, as choice was part of our great gift. We would serve and defend the light or we would join the revolt against it. Most chose the light, but to our dismay, a multitude allied with the apostate.

Open war came then, between the light and the dark. We were ablaze with the righteous luminance within us and the devotion of our brothers and sisters alongside. But those who chose the dark grew ferociously twisted and corrupt in the shadows. They knew no mercy or compassion, which made them fearsome antagonists. We cast them out from the firmament but could do no more against them. With every assault, their rage seemed to grow and our defenses diminish. We were losing.

Decisive action was imperative. We would take the fray to them where they had made their enclave on the mortal world; a world we had long gently guided and nurtured but never tread. A score of us were chosen to lead the foray to the corporeal sphere, far from the shining empyrean. We devised a plan to sway the course and turn back the tide; we would each take a part of ourselves, a shard of our very existence, and from these pieces, forge implements of war. A sword for each, containing a discrete part of our light divorced from our marrow. In this way, we hoped to have the means to beat back the onslaught without contaminating ourselves with its corrupting veil.

We met the enemy on the field of war, the bare earth and rock itself a denigration to our feet, unaccustomed to so base a sensation. In the mayhem that ensued we held the betrayers at bay, for a time. The bright spark of our determination turned to ash as, one by one, we were overwhelmed and began to fall. A fear surged up within us then, not a fear of pain or of death, but of the darkness overwhelming all and swallowing the light in formless oblivion. The end of all things, it seemed, was imminent. But then something we had not expected occurred. Men, men who we had thought of as but precocious children, came to our aid. From the sidelines they picked up our fallen arms and stood over the wreckage of our broken bodies and defended us from the deprivations of the enemy. They did something we could not; they held the line. It cost them more than I can say. They fell by the side in tens… in hundreds… in thousands. But they kept on, young, old, man, and woman, and did not falter. Men, whose brief existence from birth to death was like a single breath to us, their sacrifice all the more significant because of the brevity of their brightly burning flames.

And then they did more; they pushed the line back. They drove off the waves of darkness which retreated to the coldest, blackest places. A fervor welled within us then, because, though our own substance was at its end, we knew the light would never fail as long as there were Men. They had a valor we had not imagined. Though they had never been within the radiance of the light as we had, they defended it still. Though the darkness crept among them, they would not succumb to it.

The pieces of us we left on the field were now in the care of Men. A part of us that would always be with them. Together we would protect the light.

WHAT YOU GET AND HOW IT IS MADE

A complete package, this prototype for the Legendary Swords Project takes a high end Feathersteel (also known as Windsteel) blade made by Master Smiths in Longquan and mount it up in original hand made bronze fittings with an angelic theme. Includes a leather wrapped wood core scabbard, also mounted in original bronze fittings. As it is a prototype for a limited edition run of 20pcs maximum worldwide to follow, this is the original and only one sword is available.

We guarantee if you keep it well oiled and maintained, the blade of any sword sold from the SBG sword store will hold up to a LIFETIME of reasonable usage without breakage. If it breaks during the course of reasonable and intended usage we will replace it with either the same (or if unavailable, a similar) model completely free of charge. If you abuse it, like try to cut down a tree, attempt to replicate the destructive testing vids on you tube or otherwise use it in any way outside of traditional cutting techniques, we will do our best to help but the warranty is void. This warranty applies to the original purchaser (proof of purchase required) and remains in effect for as long as SBG is around to honor it.