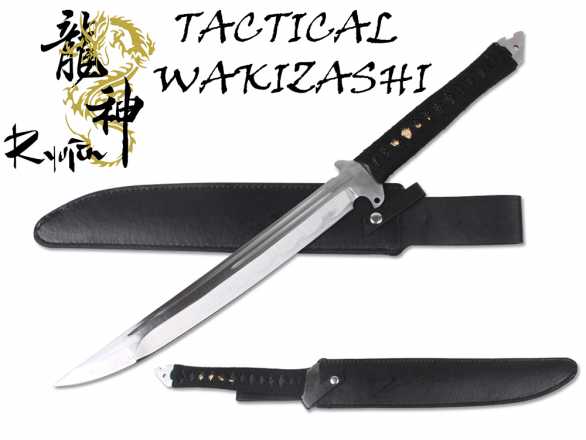 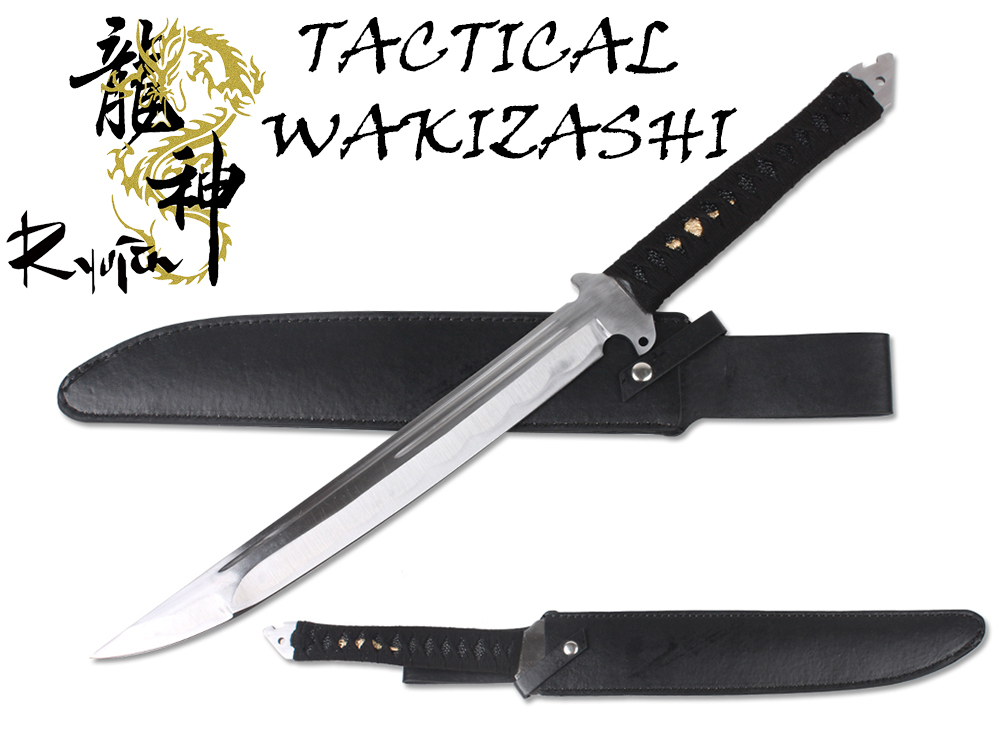 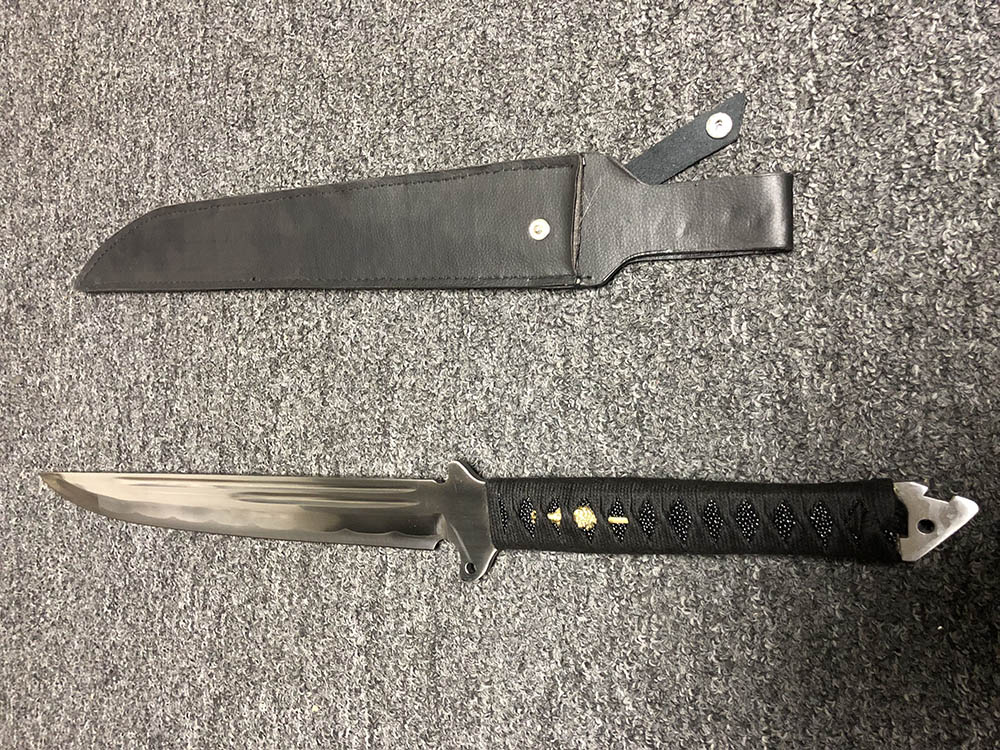 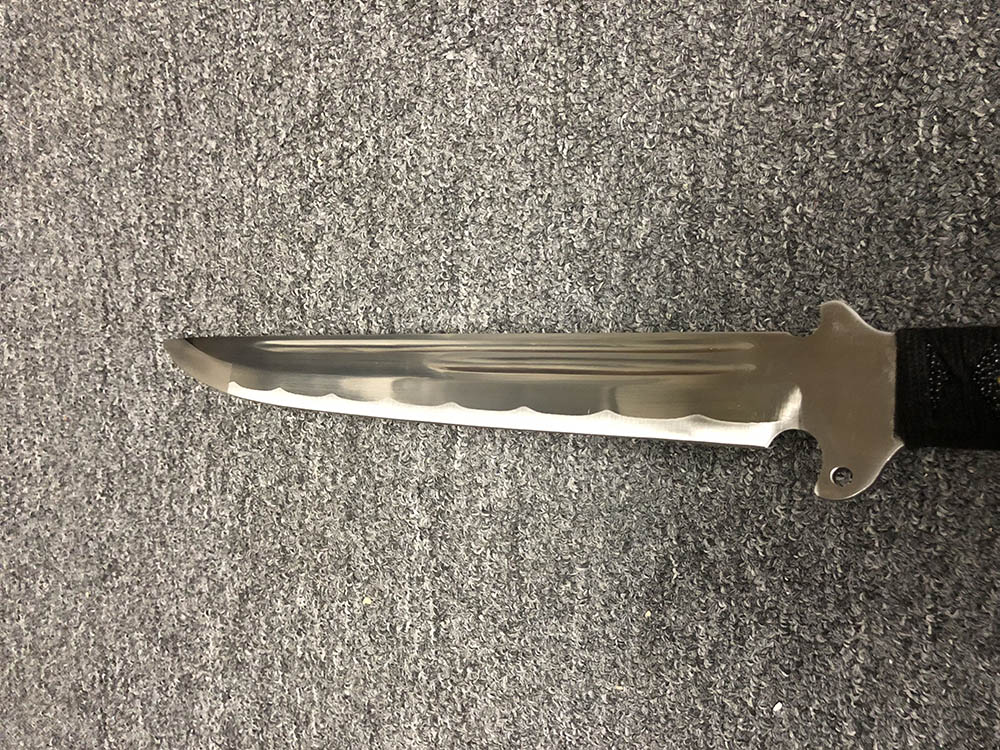 IN STOCK & ON SPECIAL

FINALLY, a truly affordable Tactical Wakizashi style blade made NOT made from stainless steel, but instead - hard wearing, oil tempered 65MN Spring Steel - and available at a heavily discounted bargain price!

There are a ton of similar looking tactical, one piece full tang construction swords like this one on the market these days. But the problem is, almost all anywhere near this price point are made from stainless steel that either shatters or bends if you actually try to cut anything significant with it..

But this Spring Steel beast is the real deal..

The 'TakWak' Tactical Wakizashi Machete by Ryujin is made from oil quenched tempered and hardened 65MN Spring Steel - a tough no-nonsense steel becoming increasingly popular for truly functional and durable swords. And with a one piece construction, it doesn't get much more durable than this (plus as with all our swords, it comes with our exclusive LIFETIME WARRANTY against breakage under normal usage conditions).

With a thick double fullered blade, despite its short size it weighs in at a whopping 2.1lbs and is balanced right where it should be to deliver truly devastating cuts and viscous hacking blows in rapid succession and is fully 'apocalypse ready'..

While brutal in design, it also gives a nod to the Japanese tradition that inspired it - with a full faux rayskin wrap bound under tightly wrapped black rayon to improve the grip and give it a true Wakizashi aesthetic, up to and including stylized brass menuki handle ornaments (that also help to tighten the ito wrap).

Add to this a lanyard hole at the base of the handle, wearable faux leather scabbard (and even a bottle opener!) and you have the perfect all round utilitarian tool that not only looks intimidating, but can actually dish out (and take) some severe punishment.. "In case of Zombie Apocalypse, break glass.."

Work to start, then gold 01/21/2020
By Red
first off, i'm going to put in a disclaimer and say that i will be nit picking, because someone has to. i'll also say when i'm nitpicking and if said nitpicks affect overall performance. also, this will be a review of the blade, not the sheath, but i'll go into that later.
short version: solid, simple, but very well constructed, handle is a bit too flat, sheath is functional at best, took a fair amount of sharpening to get functional, but the edge it takes is a beauty, very functional, very affordable, could be taken to hell and back twice.

long version: this thing is nice. its nicely built, very solid, almost all the edges are nicely rounded where they need to be. nice fit and finish, holds up ok, though i will say the grind on the tip of mine was a bit asymmetrical(me nitpicking, as all it does is make the tip a minute amount less stabby). blade grinds are all good, fullers are too, though the hamon seems to be artificial(me nitpicking, has nothing to do with function). there was a bit of unnamed gunk in the lanyard holes, but running some paracord through em cleaned it out(that was a nitpick, nothing more). balances out about an inch in front of the guard, ass you'd expect, and overall is very lively. the weight is about 2 pounds, but doesn't feel that way. the finger choils are nicely made and nicely placed, though the back one could be a bit deeper and the front one a bit bigger(another nitpick, i have big fingers). guard is small but keeps the fingers off the blade, so it works just fine. i should also point out that the "china" stamp on the blade really ruins the aesthetics, but that's just me. something that did surprise me, however, is how small the waist is on this thing.(the waist being the part between the guard and blade). its only about an inch wide by a quarter inch thick. it doesn't affect performance, just surprised me. the blade is, of course, full tang, and the glass 'cough skull cough cough' breaker is exposed and very functional, though i didn't use it on glass(yet). i should also point out that the edges on the end of the glass/skull breaker and bottle opener are kinda sharp, so be careful there. the grip is a bit flat, and could use a bit more meat on it, but it's perfectly serviceable. not as good for people (like me) with bigger hands, but it in no way keeps it from working as it should(just a nitpick, really). it's long enough for two hands if you stack your hands on top of each other, but still works just fine with one hand. the only REAL problem i had was with the edge, or rather, the lack thereof. yeah, this bad boy came a sharp as a screwdriver. the tip was pointy, but that was it. which made me very irritated. we also come to the next problem...sharpening. the steel on this thing is HARD. getting this thing up to snuff took forever. and i do mean forever. i watched the first half of punisher season one before it was sharp. if i had a worksharp of something similar it would have gone faster, but i'm a die-hard lansky man and used what i know. the good thing, though, is that it stays that way. and the edge it will take...frighteningly sharp. zipped right through branches, small limbs, 3 inch pine boughs, an old leather boot, one medium-sized russian olive sapling, and one old hickory shovel handle that i needed to break down anyways. and didn't need any resharpening. the edge wasn't quite hair popping anymore, but would have kept going for a long, long time, though god help you if you let it go dull. i suppose i could and maybe should subtract a star for that, but i won't, as it's just one of those things that come with better blades. All that's really left is the incidentals. the rayskin part of the grip is kinda "meh" and at the top is exposed a bit, but that's no big deal, just a thing to be aware of. the sheath, though...sigh. it a pleather thing that holds the knife ok. the retention strap doesn't work unless you flip it to the other side and then force it over the guard. and even then doesn't work so well. the sheath is nowhere near as nice as the blade, but it does the job acceptably well, for the moment. will probably make or buy a new one, but that's in the future and shouldn't put you off buying one of these in the least. the most important thing to know before, buying, though....THE BOTTLE OPENER DOES NOT WORK. at all. i tried numerous times on numerous bottles of beer(don't judge me, i earned those beers) and it didn't work. so, you'll just have to use the back of the blade. jokes aside, this thing is the real deal. its tough enough to take a beating, heavy enough to power through the big stuff, but light enough to use all day, which is why i ended up giving it 5 stars. 8.5/10 for sure, especially for the price.
Write a reviewRead all reviews