We used to sell these years ago – but back in those days they had a strictly regulated minimum advertising price, so while excellent, crazy sharp swords they were – they were a tad overpriced.

But price aside, the sword itself – how does it stack up? Lets take a look at it from a Pros and Cons Point of View.

PRO: The steep, wide blade angle cuts a lot like the Cheness SGC – but with a much lighter, faster (and extremely well balanced) cut (and, price again, at $40 or so less).

CON: Unlike the SGC, the blade is differentially hardened – so it is not a sword to “abuse” but rather a precision tool. And thus, not for everybody as it is considerably more breakable.

PRO: It IS DIFFERENTIALLY HARDENED and around $200! Woo-hoo!

CON: The hamon is covered over by an acid etch. I.e. it is not a natural hamon, but there is a hamon UNDER there. Crap.

PRO: Solid Iron fittings at this price point is a real plus, creating a very strong and reliable handle. Nice.

CON: The rayskin is synthetic and it is wrapped in a faux suede that cannot get quite as tight as cotton, leather, silk, etc (shifts slightly, but unlikely to come off. An annoyance, not a disaster).

PRO: On the bright side, no animals were harmed in the construction of this sword (but an ostrich got nervous).

I don’t know if it was intentional or they just got lucky (probably, like how swords developed historically, it was a process of trial and error) – but at the end of the day, for the price, this is a hugely enjoyable sword and a fantastic base for customization.

Now where have I heard that before.. Looks like I messed up linking to SBG Sword Forums Global Moderator Marc Ridgeways original review (that to do list of mine just keeps on getting longer by the second! Lol)..

Better fix that up – in the meantime, to get the full scoop on this sword, check out Marc’s review here – it is actually super helpful as it is also a bit like a guide to Japanese terminology at the same time (actually, tell the truth, I added this later with Marcs blessing he freely used some advanced terminology without referencing it – and I decided it would be a good chance to introduce beginners to the meaning at the same time)..

In the meantime, here it is in all it’s glory.

It is generic, it is cheap.

It is solidly constructed – it looks cool..

But the price tag makes it even cooler..

At $149.99 with FREE SHIPPING it is one of the cheapest non Japanese battle ready swords on the market – especially when you consider just the amount of steel you get for your buck.. (31″ blade and weighing in at a manageable but authoritize 3lbs 2oz) and apparently, pretty suitable for belly dancing according to this belly dance review and video.

Thankfully for all of us, it is not one of MY Videos. 😉

Seems that it is both belly or battle ready, not something you can say about too many swords now is it.. (Not dropping the sharp tip on your foot however, is pretty universal advice for sword collectors!).

It is basically a RAPTOR series blade mounted in an ultra modern, military fashion – and this line has proved to be a popular one.

Until recently, Hanwei kind of hogged this line to themselves, and the price was a non negotiable $175 – which isn’t an unrealistic price, but I think you will agree, OUR price is a lot more attractive…

I often get asked the question:

What is the most durable Katana I can buy?

The answer is a tricky one – historically Katana never were all that durable. They could and would break during the heat of combat, leading to a sudden and unexpected death because while they were easy enough to snap (there is a scene in the movie “Shogun” in which Hideo Takamatsu playing the part of Buntaro is furious at his wife Mariko for getting too close to the barbarian gaijin Blackthorne, and he draws his sword to strike her down, thinks better of it, cuts deep into a wooden support beam, and snaps his sword clean in half when he tries to retrieve it! Serves him right – but the sword breaking like that, all quite historically plausible I am afraid..)

The reason most people think Katana are so amazingly durable is, I believe, twofold:

1) Because it can, in the hands of a skilled swordsman, cut you clean in half with one cut. Historical Katana were SPECIALIZED to cut, as grim as it sounds, human flesh and bone in the form of an unarmored or minimally armored opponent. There were exceptions, like the Dotanuki style of blade, which was used to cut an ARMORED opponent in half, but these were – as I said – exceptions. The misconception comes about because we imagine we are more special than say, a tree, so if it can cut us so easily, surely it can cut ANYTHING. But not so..

2) The second reason is, well, this kind of thing:

While the reality is actually a lot scarier..

Anyway, while a totally indestructible, cut anything Katana may be a misconception/myth – around 10-15 years ago there appeared on the market monotempered Katana, which with a simple maru lamination and decent heat treatment, proved capable of withstanding tremendous punishment when compared to a historical Katana, bridging the gap between “Myth and Fantasy”..

When they found out that it was all quite serious, naturally, the market responded with enthusiastic zeal, so with modern steels and much trial and error, the sword industries quest for the most durable blade possible began in earnest..

Now at SBG we have found a couple of really good steels, configurations and tempering methods that do not cost too much but yield, pound for pound, can withstand the kind of abuse that would break a traditional Katana clean in half..

Yet, the best we have offered to date, our 9260 Spring Steel Katana – arguably our most durable Katana (followed closely by the expert tempered 1060 carbon steel Dõtanuki blades from Ronin Katana) are made to a budget. If we can look above the US$300 price point, looking ONLY for what most collectors consider to be the most durable steel currently in existance – the closest thing to an “indestructible” sword – then the answer would have to be a Howard Clark L6 Bainite Katana.. 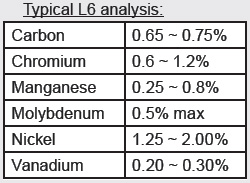 So exactly what is this L6 Bainite stuff, from a laymans’ point of view?

Well, it was originally first used by famous US swordsmith, Howard Clark and tested to the extreme by Adrian Ko from SFI back in 1999 (it isn’t online these days sadly, or at least several hours of searching suggested it has all been buried – but his tests showed him bending the sword in a vice more than 90 degrees and it sprang back to true!) – and needless to say, as word got out – people started getting excited.

Here is a video of Howard Clark and James Williams explaining more details about what it is all about and why L6 Bainite is so special:

Now this is all very well and good.

Only problem is, best of luck getting Howard Clark to make a sword for you in 2014..!

His backlog must be several years by now and he can pick and choose, indeed I recently saw a second hand Howard Clark BARE BLADE sell for over $3,400 in the classifieds section of a sword forum..!

With such demand, you would expect L6 blades would be everywhere.

Not so, as they are notoriously hard to make, and for years no one could crack the code.. That is until Paul Chen from Hanwei’s own son, Ron Chen – a skilled swordsmith in his own right – decided he would not rest until he did.. The result? In their own words:

Bainite is a structure of high-carbon steel that combines great strength with excellent flexibility and shock absorption characteristics. It has been known as an exemplary Katana blade component for a number of years but its use has been restricted to a few top-class master smiths, due to the difficulties involved in performing the exacting heat treatment procedures necessary for the production of a Bainite blade body in combination with the very hard Martensite Yakiba (edge section) required for Katana blades.

Hanwei has now mastered this difficult process, using billets of L-6 tool steel (a very tough high-carbon low-alloy steel) as a starting point. Blades are forged and shaped in the normal way, then carefully heat treated to achieve the required Bainite and Martensite structures before final polishing.

Yes, they succeeded in making a Hanwei L6 Bainite Katana they were proud to call their own – and the fruit of that labor is the sword this post revolves around, the stunning Preying Mantis Katana, now IN STOCK and available at the lowest price it has EVER been made available for..

If you are a fan of high end Katana and want to own a blade made from this somewhat legendary sword steel, you had best be quick..

Not many of these are made, it is often a year or more between restocks, and at this price, they will surely be snapped up by discerning collectors – and provides something for the rest of us to drool over and aspire to…

The funny thing about Japanese swords is that, while superficially to the completely untrained observer two swords might look “the same” – one is priced at $10,000 and the other, $60 (ok, you would think even the untrained eye might see the difference – but the point I am trying to make is that Japanese style swords, especially production models, are priced depending on how REFINED they are).

The only problem is, the more refined the blade – the more $$$. So what is the answer for someone who appreciates and wants a taste of a higher level of craftsmanship, but whose budget can’t justify spending over a grand to get one – we offer a middle way: why not buy an elite level WAKIZASHI!

We selected two of Hanwei’s finest to stock at SBG. And we shaved our margins to the bone to make the affordable alternative even more affordable.

Check out what we selected below.