SIDE-NOTE: We also used to offer the SBG Custom Katana from 2008, but for now and indefinitely this product is on hold.

In the meantime, let’s do some comparison between the different lines available.

Each line has a lot in common, but also many critical differences as they are made at different (and competing) forges. So what one forge may have or can do, another cannot and visa versa.

In this article we will take a detailed look at:

So without any further ado, lets get started..

First off, the similarities

Why? Simply because I have found over the years that T10 tool steel is very strong for a differentially hardened traditional style blade and the hamon tends to come out quite prominently, and when polished to perfection is very crisp and attractive.

In terms of strength, we have tested T10 tool steel swords on a large variety of targets, from saplings, super thick bamboo, pork leg bone and meat, to metal poles, 55 gallon steel drums and in every case the blades have held up incredibly well. You can see this testing in our review of the Ryujin line here and the SBG custom line here – but to cut a long story short, this steel holds up much better than any other steel type when it comes to a traditional blade, most of which are not really all that strong – but T10 just works really well for a dual tempered blade..

Here is some of the earliest testing I did that showed just how tough this stuff can be:

Additionally, it takes and holds a very keen edge – making it tough but also capable of very precise cutting. But finally, it also LOOKS great – the hamon is always prominent, though how prominent, its style and how well polished depends on which custom line you go with..

The basic Ryujin Polish when photographed from just the right angle looks something like this: 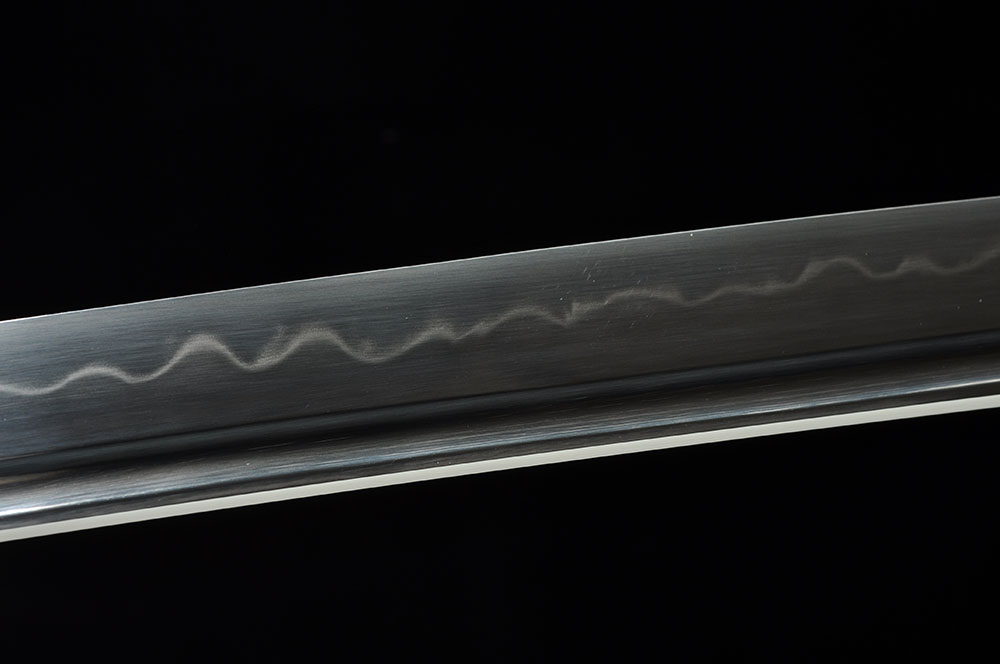 Not bad considering the sub $300 price tag, and that mostly comes down to the qualities T10 has mentioned earlier. But look at what happens when the same steel is worked by the Master Smith and Forge Owners – better fittings, and typically $4-500 more.

And then, what happens when its folded by a Master for another $300 or so.. 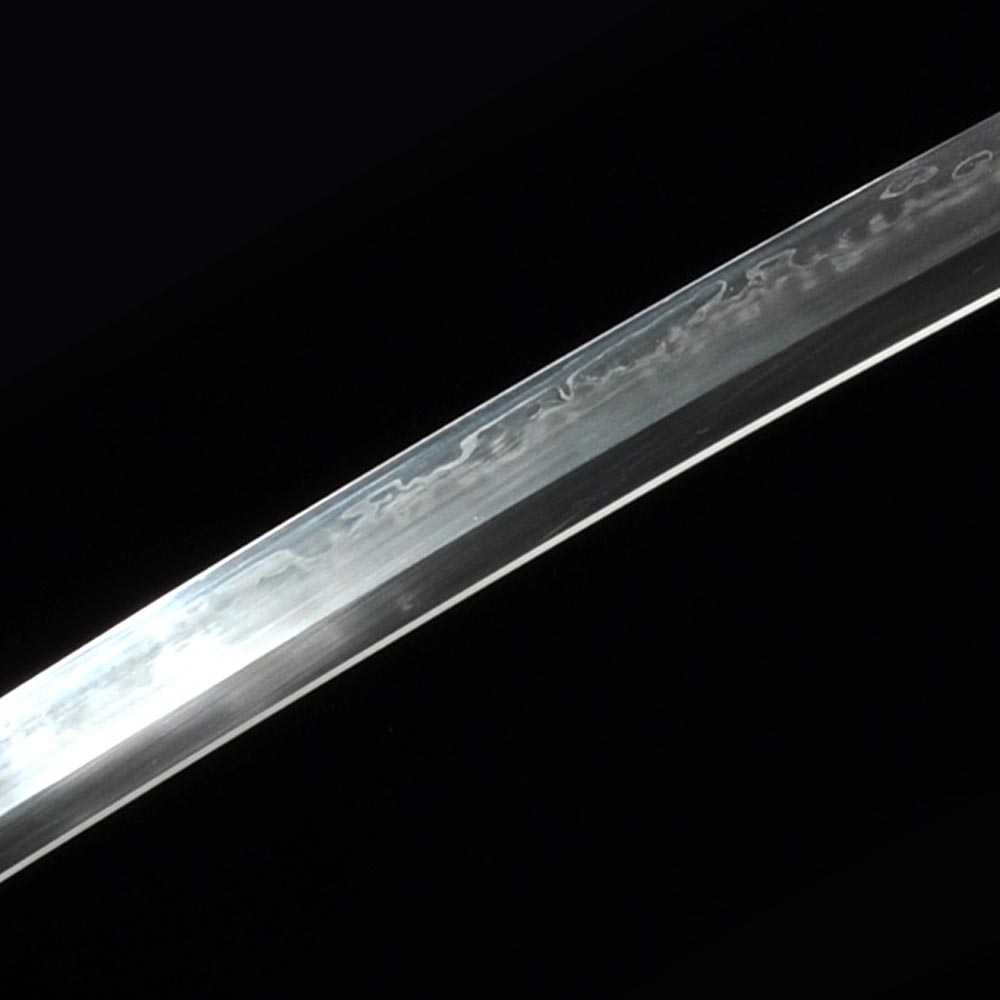 So how nicely it turns out depends on who makes it and the corresponding price paid – so its no real surprise, you get what you pay for.

Speaking of which, our highest end sword – the reintroduced Project X Japanese Katana, uses a complex tri steel 7 layer lamination known as Soshu Kitae – with hard 1095 steel edges, spine and sides, a core of shock resistant 1045 carbon steel sandwiched between two more layers of tough 1060 carbon steel (we said it was complex)! The end result, a very lively blade with lots of activity and interplay between the lamination and hamon (click to see a high resolution version so you can REALLY see the details). 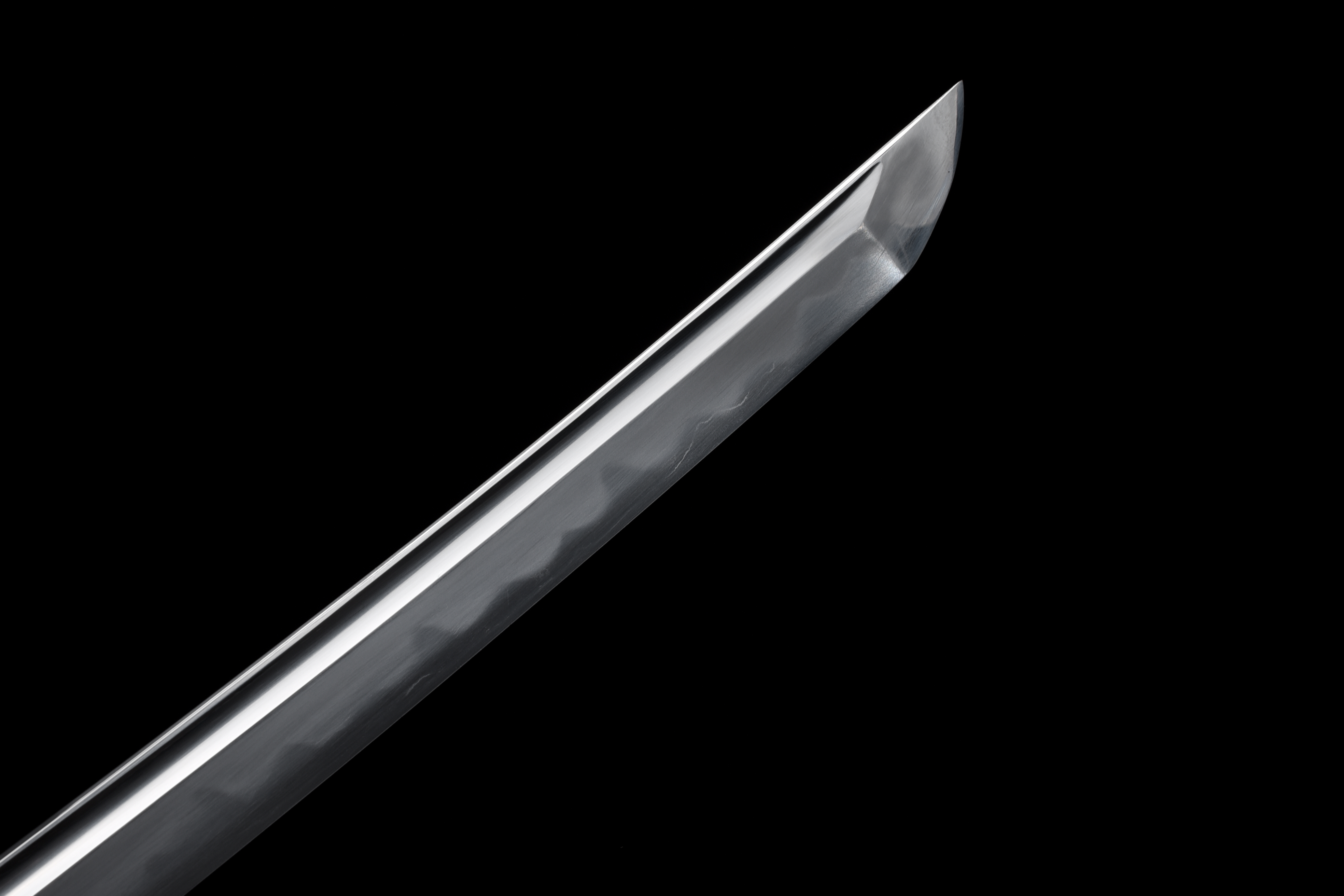 A folded version is available, but it is very subtle and only really recommended for collectors who need a sword as close to the same construction methods as a historical Katana. These have limited fitting choices and a flat rate typically at $1000 including shipping – but there is a relatively high tolerance for minor tweaks not available on any line previously.

Obviously, the blades are different for each line – but we have already covered this to some degree. But another point of difference is the fittings.

All the fittings are not interchangeable between the three main lines, as each line is made by a different forge and via different assembly methods.

But despite this, they are assembled in totally different countries – and the main point we want to make is that – you can’t mix and match components between the three sword lines. Sometimes they buy the components from a central supplier, but just as often they make their own in house and as competitors, do not share. So its very much a case of what you see is what you get.

So let’s look at what you get.

Variations of Customization Options By Line

The Ryujin line is the most basic, with a 10 available tsuba choices, 8 available tsuka (handle) color choices and 10 different types of saya. You cannot select the color of the rayskin, nor length of the blade – though there are models such as a bo-hi (fullered) and no-hi model.

The Forge Direct Custom Katana line has the MOST customization options available – so much so that it is about as close to a fully customized sword as possible, at least in terms of fittings. The Blade length can be specified, 26, 27, 28 or 29″ and there is an optional O-Katana blade available as well as Ko Katana and Wakizashi to create matching Daisho sets.

It has most of the Ryujin tsuba sets available (12 sets total) and 28 elite work hardened copper sets, some which are the same as the SBG custom line and available widely generally, others exclusively for the Forge Direct Elite line. There are 9 SILK ito handle colors available, 5 colors of rayskin (white and black, plus red, purple and yellow), 8 different types of hard wearing silk sageo, and a whopping 36 styles of saya – many of which are extremely expensive for us to produce, but all heavily discounted with subsidized additional fees well below market value.

We have created 11 pre-designed themed products – select the default option and you will get the original design. But for the most part, you can mix and match between different models at no additional cost, add in some personal customizations, and create a sword either close to or radically different than the base model.

Overall, there are not as many options as Forge Direct because we simply refused to use any single inferior product the forge has available – so anything not quite up to standard was discard as an option. For example, we only have 2 colors of itomaki wrap available with 2 colors for the full rayskin wrap beneath. 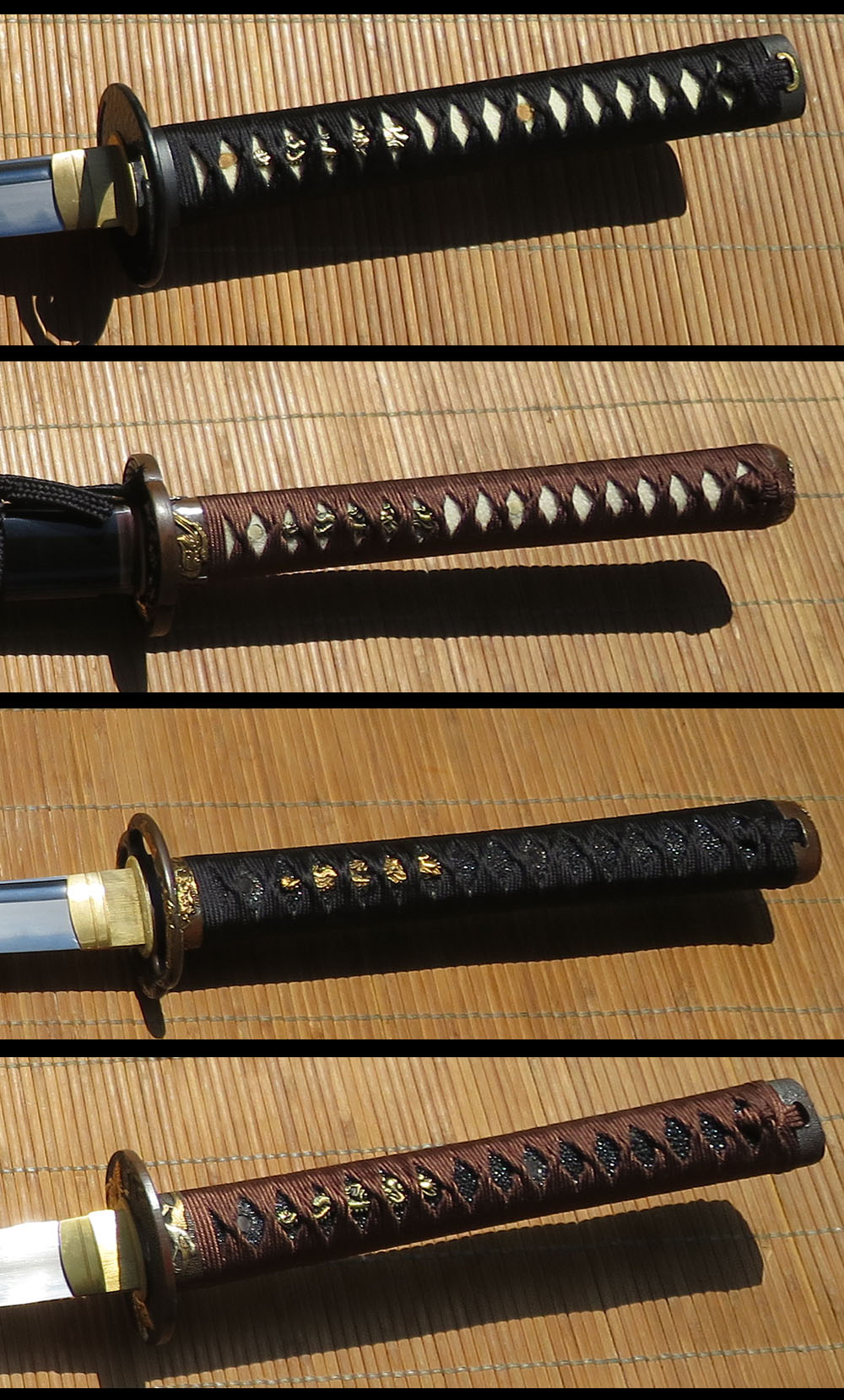 Why only these colors? Well, for this forge – the only pure silk ito they have is in brown or black, every other type is inferior, stretches and we simply can’t accept any component that is not the best available..

In terms of customization choices, they were somewhere in the middle between Forge Direct and Project X though they were made to order within the confines of a tried and tested system developed over the years.

Out of all the sword lines, it was the one that offered the most value – and being made at the same forge as Forge Direct and Ryujin (many of the big forges produce various ‘brands’) was priced at cost simply to try and help people who wanted a custom Katana avoid the scammers – but as you will know if you read the full story, at the end of the day we simply could not compete with blatant lies and as orders became fewer and fewer with each batch, it no longer became viable to produce..

The final main differences is of course price, and how long it takes to receive your custom design from ordering to it arriving a at your door.

Obviously, being assembled from parts in the USA, The Ryujin swords are the fastest and the most affordable, starting at $199.99 for a limited option model and up to $499.99 for the Elite Choji Midare version.  As mentioned, these swords are actually assembled in a workshop based in Chino, Los Angeles – so when it comes to speed and price, no-one else can come close.

The Forge direct Elite line are made to order by master smiths and shipped directly from the forge. Prices start at around $549 for a Wakizashi up to $799 for a custom O-Katana, though optional extras (at subsized pricing) are available. Available all year round, they are usually completed and shipped out within 4-6 weeks (6-8 weeks for the O-Katana) though delays of a couple of extra weeks are not unheard of as some parts take longer to bring in or create than others and may be effected by long national holidays.

Project X Japanese so far follows the same ‘batch’ model as the discontinued SBG Custom Katana, though they are made on a first ordered, first shipped basis rather than waiting until all the orders in the the entire batch are finalized. Starting at $870 for the Wakizashi/Ko Katana version and $1000 for most other models – they may seem expensive, but like all our lines are underpriced and quite risky for us as the profits are miniscule ($1500 to $2000 would be a fair price for these swords – $1000 is almost as much as they cost to make and ship).

Biggest problem is, due to the complexity of the forging process, the turn around time for these is 3-4 months on average, meaning that they are only offered 3-4 times a year at best.

And finally, the historical SBG Custom Katana – priced at $429.99 but taking the longest time of all our lines to make because the swords were batched together over a period of one month, and only when all orders were finalized forging would commence over the next 2-3 months. Finally, they were shipped as a batch to a team in Canada who goes over each sword, ensuring the customizations are correct and checking for defects before final shipping – effectively going off the charts with the level of quality control. A real shame they were decimated by aggressive lying China based sellers..

So here is a quick summary. Except for the Soshu Kitae laminated blades from Project X, all the blades are made from the same type of steel, differentially hardened T10 – but at different levels of refinement and therefore, at different price points.

The component choices vary by each line and they are NOT interchangeable with the other lines. What you see available for one line is all you can get.

We would like to think that within these three lines there is something for everyone, for every taste and every budget. True enough, these are not 100% custom swords – you do need to select from pre-designated selections with only some minor tweaking on the lines made from scratch at the forges.

But over the years we have seen so many different variations and unique combinations that suggest that even with the same brand you can create wildly different looking designs.

It never ceases to amaze me the imaginative creations our customers come up with to creating a truly unique sword that best suits their own individual style from the available options. Even on the Ryujin line, it is incredibly rare to see two swords exactly the same – and I think that this freedom of choice, to design your own personal sword, is what makes our custom katana projects so rewarding and so much fun.

Enjoy the process, and if you have any questions just let us know. We are always happy to answer your questions.