The restock of our Cheness Cutlery and Ronin Katana lines seemed to take forever to come in, but I am pleased to advise that as of yesterday both lines have been fully stocked and are good to go (Cheness came in last week, but Ronin – which was originally scheduled for mid July took until August the 7th! But these things do happen when importing swords in large numbers).

A few quick notes on the Ronin restock – models 4 and 5 have been swapped around, i.e. the model formerly known as model 4 is now model 5 and model 5 is now model 4. The product names are the same, and there are no other changes, but I thought I should mention it to try and diffuse any possible confusion (though probably it has had the opposite result! No need to worry though, it’s really just an internal logistical thing anyway).

Also, stock levels on two models – the exceptionally popular Ko Katana and the model 4 (previously the model 5, argh – well, THIS one) – are not enough to last very long, so if you want to get hold of these you really do need to act fast.

Finally, they have also brought back the woodland themed ‘Morinokami’ sword (model 13) shown below: 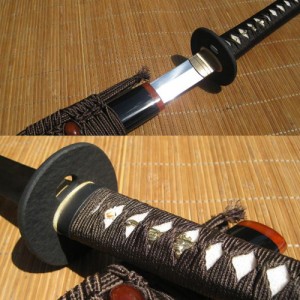 So anyway, good to see that for the most part the store is pretty well stocked at the moment – and it is about to get a lot more interesting as the Prototypes for Project X are also in and being inspected, checked and photographed. So stay tuned, more news on this VERY soon..!

Ok, a quick update as to where we are at.

Now that batch 20 is officially closed and batching up to go to the forge we are concentrating on preparing for the previous batch 19 to land and be sorted and shipped to their expectant customers.

I’ll be in contact with everyone from batch 20 over the next few days, so really this is more of a side note here – in the meantime, the long anticipated restock of Ronin Katana’s Dojo Pro series is expected to land and be ready to start shipping orders between the 23rd to the 27th, and as these swords have been out of stock for several months now, I expect the initial demand is going to be rather intense – especially for the extremely popular Dojo Pro Ko Katana – which may only actually be in stock for a few days (they sold out in a couple of weeks last time and the pressure has been building on them ever since).

As such, if you are interested in this particular model and want to secure one I STRONGLY suggest you sign up to the notification list by clicking the ‘order’ button and then entering your email address to be informed the minute it is available to order (this occurs automatically on all out of stock products).

Of course, along with this incoming shipment are the two prototypes of the Project X Katana – so once we have the stats and some detailed pictures we will be offering this truly exceptional opportunity to a select number of individuals. So stay tuned folks! Exciting stuff ahead!

That’s it guys, batch 20 is now officially closed and my assistant Karyn and I will be going over all the orders in the next couple of days, tying up any loose ends and then getting the instructions to the forge.

I will email everyone who ordered soon afterwards, in the meantime – great to see so many new and original designs.

Once we have the forge running again I’ll be focusing 100% on getting the batch 19 orders to everyone (they are still in transit at the moment) so hope you can all bear with me.

Ok guys, as you may have noticed the countdown clock for closing batch 20 is nearly up.

To date, orders have been nice and smooth and we should be able to batch everything up within 2-3 days after we stop taking new orders. However, as the clock is literally ticking, any orders placed in this last period need to be pretty well thought out – in the first few days of order taking we can (and have) made quite a few changes to individual orders, but now that it’s nearly time to batch – and we DON’T make any changes once we submit your design to the forge – if you are planning on a last minute order, please make sure your design is 100% correct and well thought out.

You shouldn’t rush, if you feel the need to rush ‘something’ in I strongly suggest you instead hold off until batch 21..

I’ll post again soon after the batch closes, but yes – until then, please don’t rush!

Check the SBG Custom Katana Blog for more info!!! In the meantime, batch 19 continues to roll in, we just sold out of the popular Hanwei’s Colonel Gunto in our hot specials section, and within the next couple of weeks we will also see a restock of Ronin Katana, Cheness and of course the first exclusive pre-orders for Project X! Exciting stuff indeed! – Paul