Just a very quick note, Batch 41 of the SBG Custom Katana officially closed off a few minutes ago and we will be spending the next couple of days confirming each order and making sure that all the details are correct and accommodate any last minute changes before we send the batch over to the forge to bring all the great new designs to life..

In the meantime, as the SBG Custom Katana will not be available to order again until at least mid September, we have temporarily moved the Custom Katana sales page HERE to the archives section.

We will post the occasional update here and email our customers with progress reports as the forge works away. In the meantime, thanks for your orders and talk again soon..!

Subscribers to our store newsletter already know, but just a heads up for everyone else – batch 41 of the official SBG Custom Katana opened up on the 26th of May and we are already taking our first orders. 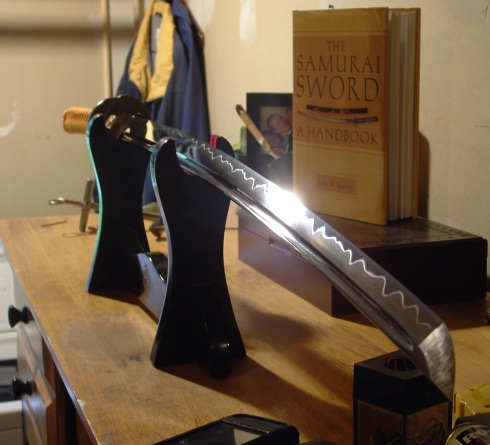 The swords should be completed and shipping out by mid to late September 2017 and the order period for this batch closes on the 15th of June, so if you have been waiting for a chance to order – well, here it is!

It has been almost a year since we have offered the custom Katana – so the demand has certainly been building over the last year – so don’t miss out, we have moved heaven and earth to keep the price at $429.99 and added some popular new optional extras such as SanMai and Kobuse laminations, and a selection of hard to source Koshirae sets.

So what need more I say – check it out here

It has been nearly a year since we last took orders on the official SBG Custom Katana 3.0 series – and despite running on increasingly thin profit margins, and experiencing many unexpected and lengthy delays – due to popular demand we are retooling this line which we have been running for the last 9-10 years and preparing to give it another run..

The forge are aware of how strict we need to be this time around. And to meet our customer demands, we also added a few additional optional extras to create an even more authentic, truly personalized sword..

The first optional extras have to do with the construction of the blade itself. The standard SBG Custom Katana 3.0 is a Maru Blade, that is to say the blade is made from one type of steel (T10 tool steel) with the option to have it folded 6-7 times for a traditional look and attractive hada.

But we have added two additional lamination options – SanMai and Kobuse laminations – to create the most authentic blade ever (plus, you can combine the laminated blade with folding to get it as close as possible to the forging methods used to make a real Nihonto at just a fraction of the price you would expect to pay for a complete package like this).. 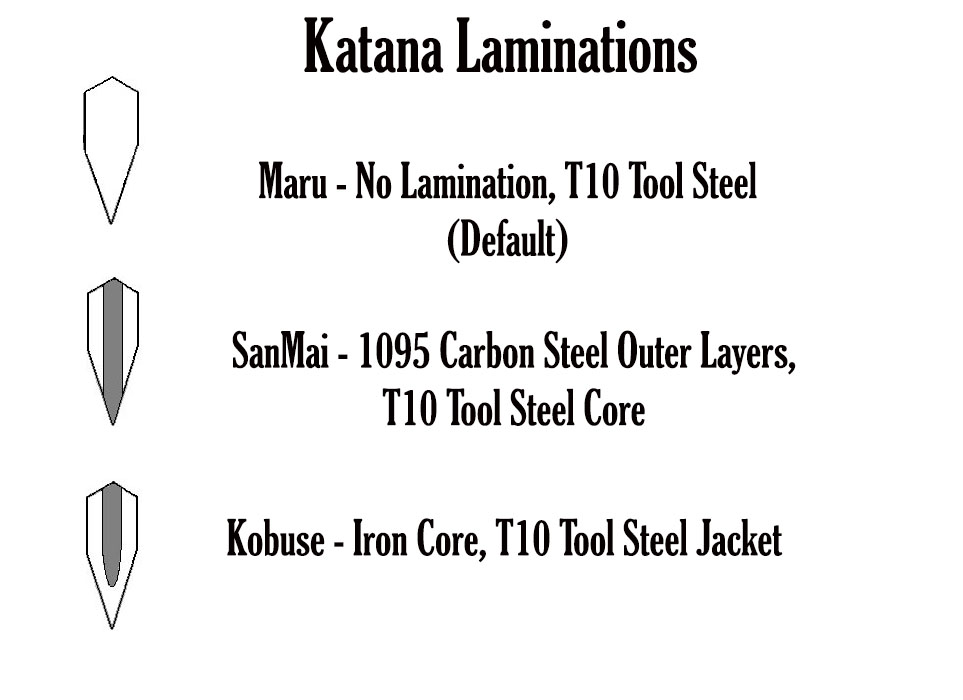 As you can see, the standard blade is made from a billet of pure T10 Tool Steel, while the SanMai is T10 sandwiched between two layers of ever so slightly softer 1095 carbon steel to create a stiff, forceful cutting blade with attractive lamination lines and the Kobuse has a soft core of iron enveloped on both sides of the cutting edge by a T10 tool steel Jacket.

The Kobuse lamination is perhaps the most practical of the two choices we offer, with the softer core acting as a shock absorber to further increase overall durability, while the SanMai is more visually striking – especially when combined with folding and the clay tempered hamon that each and every sword comes with as standard.. 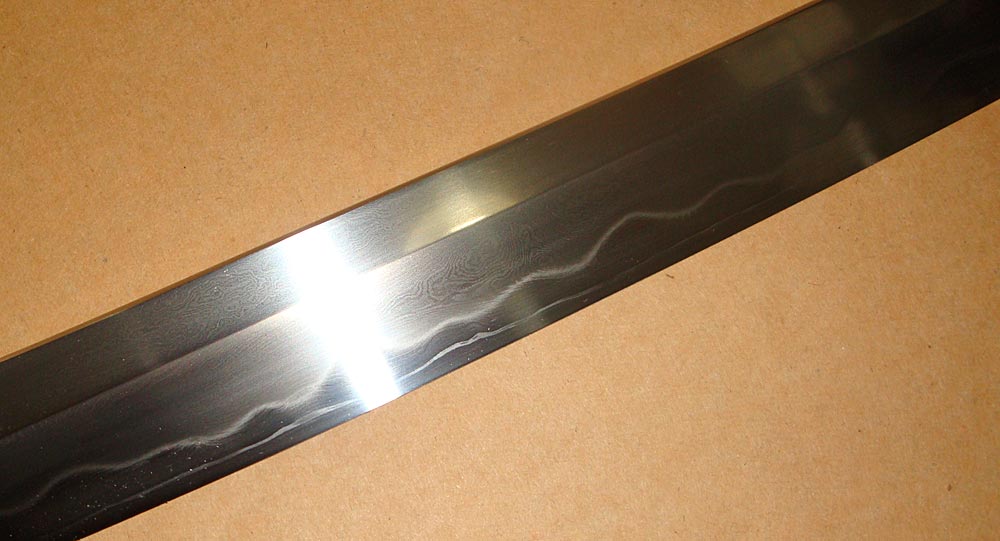 Clay Tempered with real hamon, real SanMai Lamination and Folding for the most traditional look

In addition to these optional extras on the blade, due to popular demand we were able to secure a limited supply of 4 extremely popular premium quality Koshirae sets – including the classic ‘Hobgoblin’, the Torakami configuration and more – available for an additional $25. 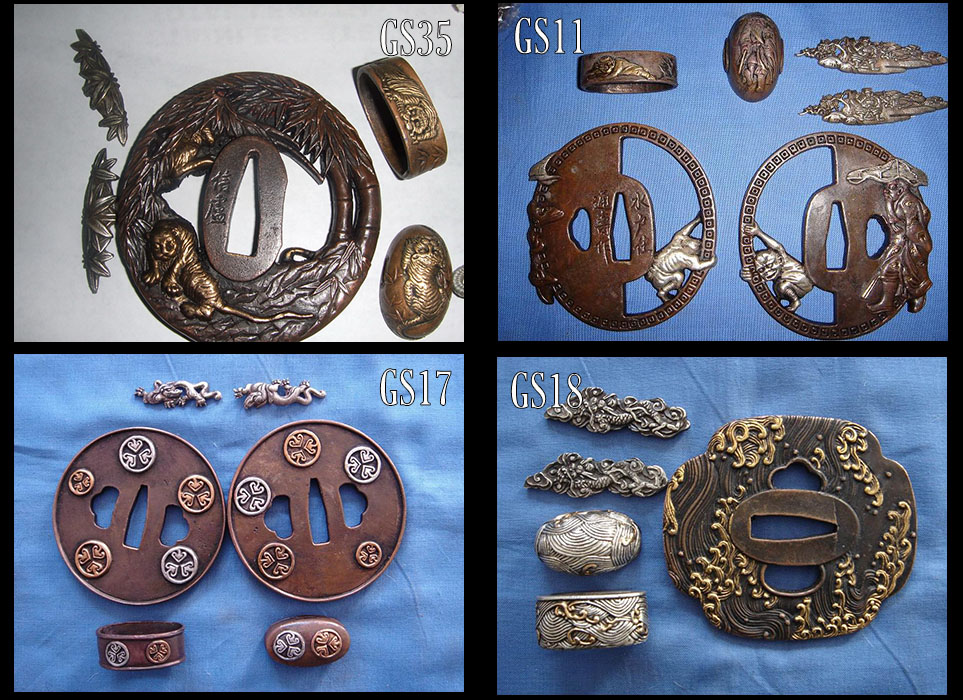 The only thing remaining now is a final price confirmation and check with the forge – as the base cost of all components has increased dramatically in the last few years. But more so, the cost of shipping (which we absorb – shipping is FREE to anywhere in North America/Canada) – as well as the cost of inspecting, repackaging and reshipping each sword – has skyrocketed to the point where the special base price of $429.99 may not even be enough to break even.. (In all honesty, the base price should be closer to $600 to cover costs if something goes wrong and to pay for all the time that goes into each order)..

But we will do our best to bring it back at the old price, or as close to it as humanly possible, because I consider the SBG Custom Katana to be something of a service to the sword community.. It is not a sword that sells enough pieces to be a threat to any other sword manufacturer, but it has been fine tuned over the years to offer the absolute best bang for your buck blade possible if you have the patience to wait it out..

So stay tuned folks, I know that many people have been waiting a LOOONG time for this line to come back, and to those of you who have been patiently waiting for your chance, it is just around the corner..

Technically speaking, they aren’t scratched and they aren’t dented.. The only issue with these 6 swords is that you cannot disassemble them because we had to permanently attach the tsuka.. But when they are priced like this and don’t need any modifications to look any better, I don’t really see why you would need to..

The six swords you see below are all from batches 36 to 39 of the SBG Custom Katana – which I am pleased to say we are aiming to bring back as soon as we have the final swords from batch 40 cleared from a bit of a customs tangle and out into the hands of the customers..

Each of these swords had that issue we experienced on the Black Dragon line and the SBG custom katana series in 2016 – that is to say the wood had shifted during the summer months and shifted slightly inside the handle when swung. Not an uncommon thing, and something we have taken many steps to avoid a repeat of, but enough for us to fail them with the stringent level of QC we apply to this line..

So while we have already either refunded the customers who originally ordered them or made them a replacement, we need to try and minimize the losses – and our misfortune is again your opportunity to snap up a bargain..!

Here are the 6 designs in all their glory with a brief description. They are available on a first come first served basis and of course, this is not something we plan or hope to repeat, so if you like one of them be sure to grab it before someone else does..!

Unlike cheap folded blades, which are often much worse than an unfolded one, the folded models below are all folded professionally and provide that traditional hada aesthetic without losing anything in the way of structural integrity. Most also have other upgrades such as leather ito with hisigami and/or rayskin wrap on the saya and would normally cost around $550 at SBG, considerably more if we followed standard industry pricing.. 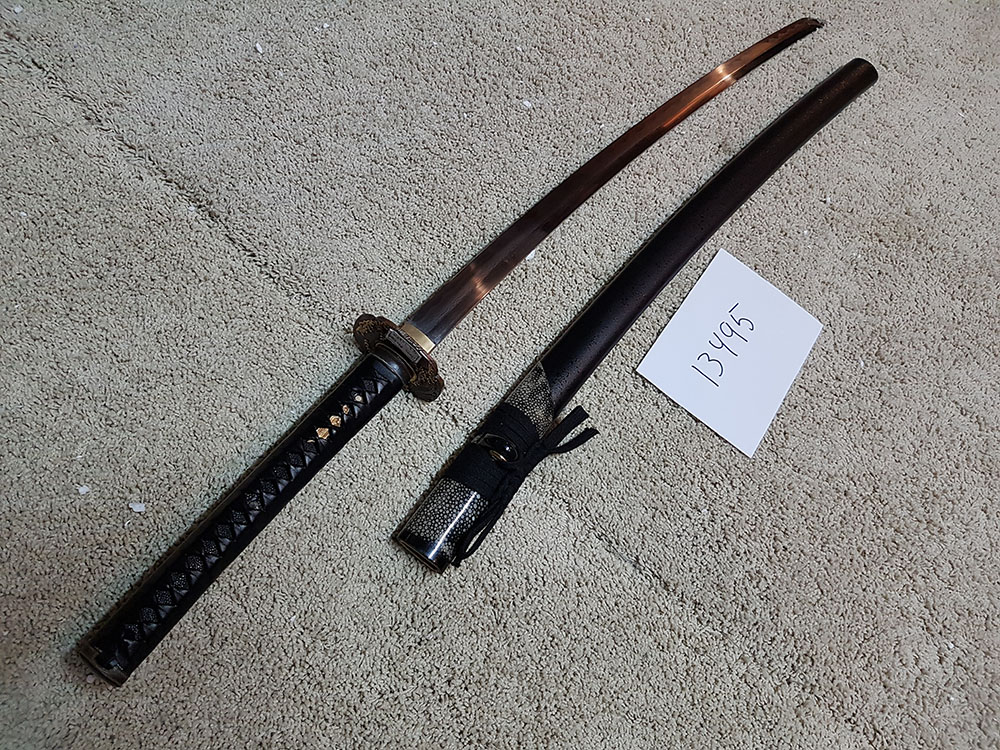 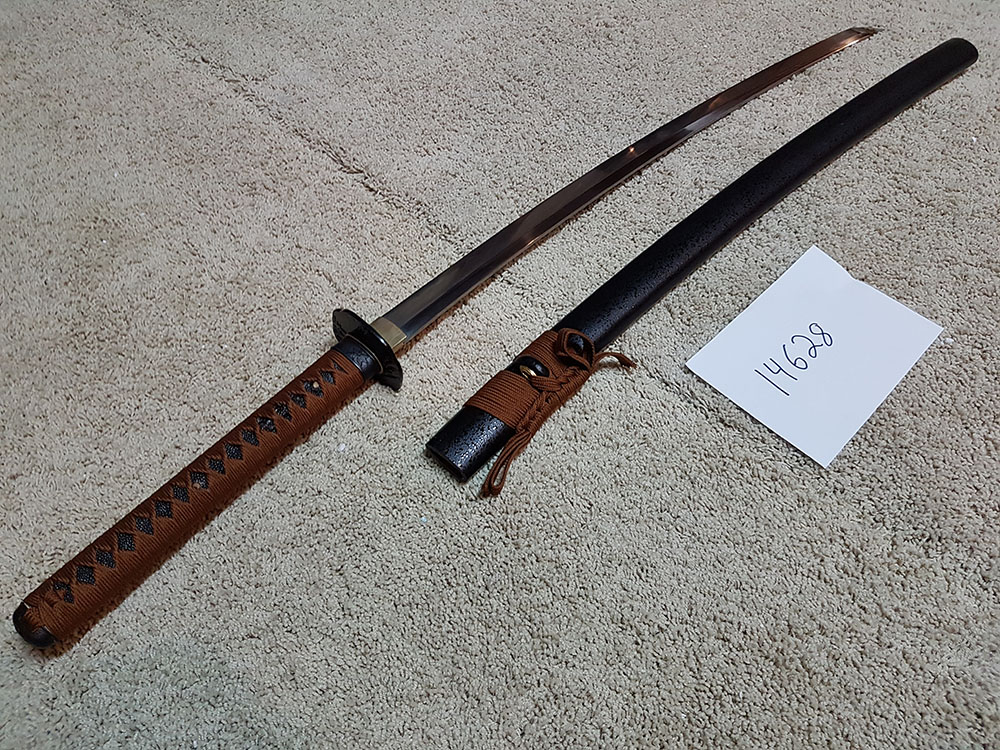 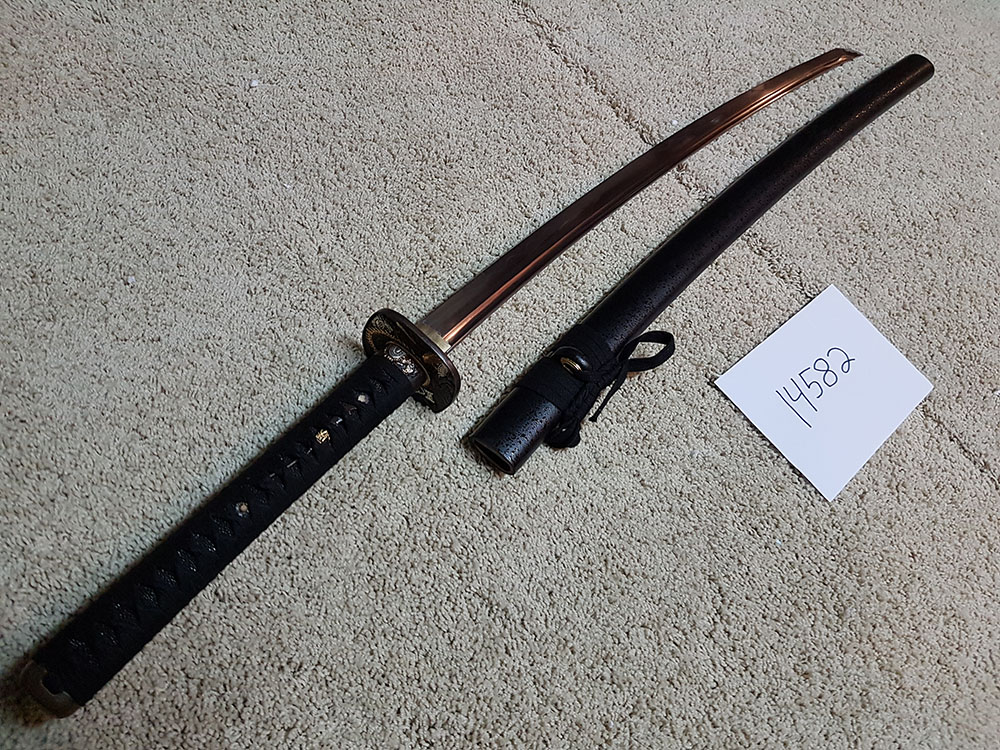 Black on blacketey black with Oni Matsuri work hardened copper fittings.. The blade is not blood red, just the lighting in the pic – click on the pic of any of these swords to see more images.. Sold for $429.99, now being sacrified for $229.99.. 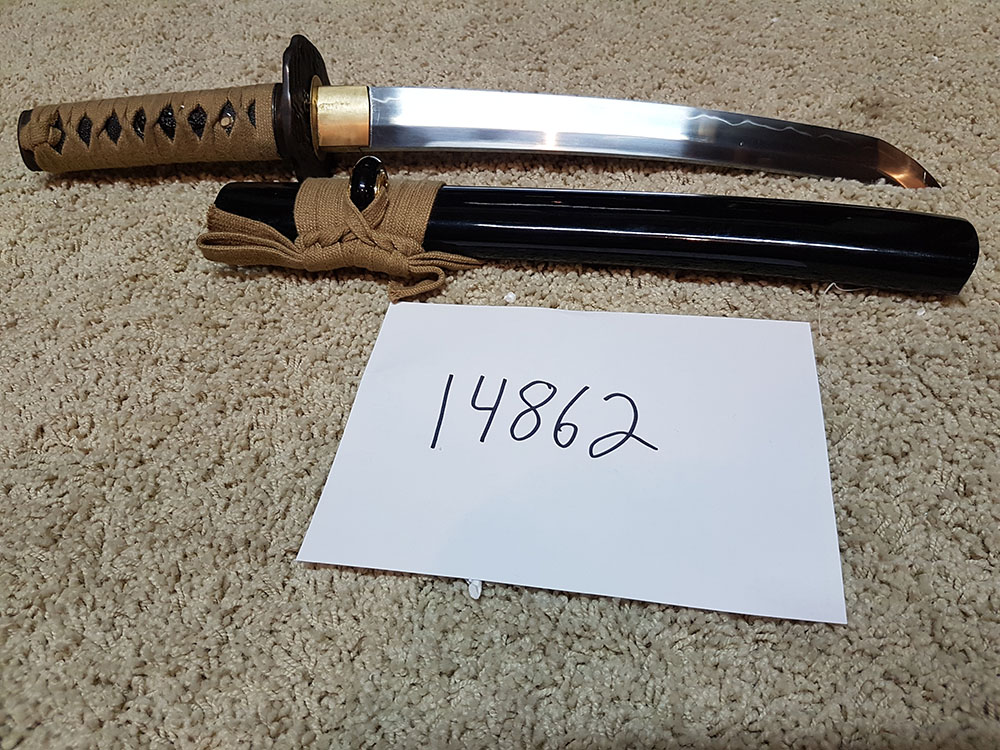 Each of these swords has otherwise passed QC testing, and indeed they actually cost us more to repair than the stupid $100-$250 discounts we are applying to them..

But we need to at least recover some of the losses – so insane as it is – best get them before someone else does or I come to my senses and realize I should not be discounting them by this much.. (I am not kidding, as I write this post I am thinking – no way I should be selling them this low – and that is NOT some kind of marketing gimmick!).

Well, hope they go to a good home.

As anyone who has been following the SBG Custom Katana Batch Status Page will know, it has been a very hard road dealing with numerous unexpected delays on from batch 37 onwards – and while batch 37 was recently completed, we are still struggling to catch up on batch 38-40 – though on the positive side as each of these batches are quite small, we are hoping to make significant progress getting them sorted, inspected and out to our patiently waiting customers this month..

In the meantime though, here are some pics of some of the completed swords from batch 38. 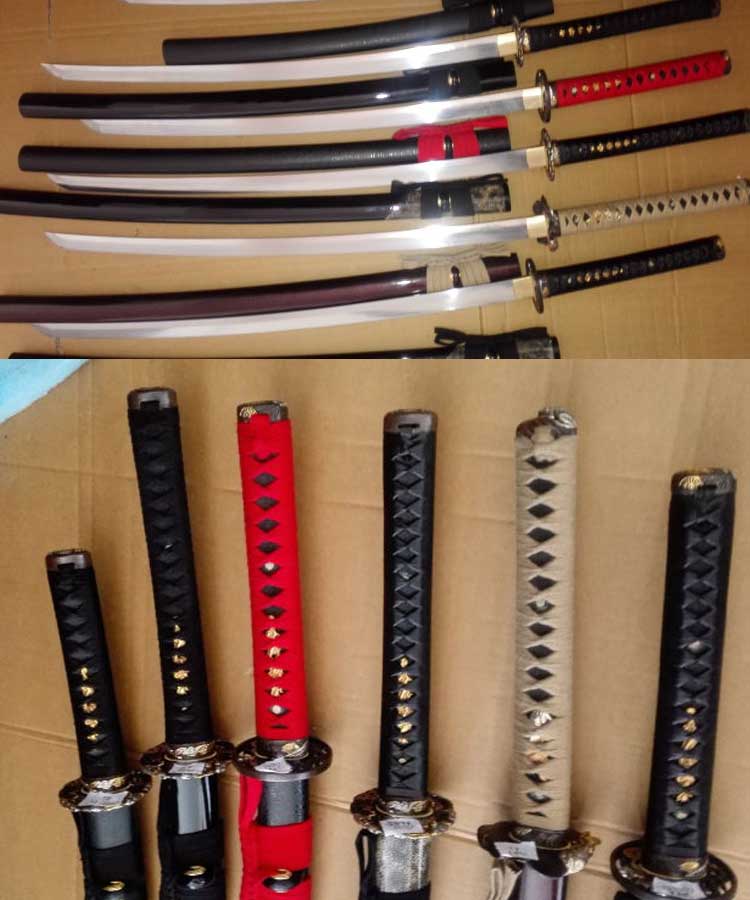 I will do my best to keep everyone updated, really looking forward to getting it all back on track I can assure you..