Just a very quick update – partially because I realized that on the original cut off date of the 29th of October I will be traveling on business without any internet connection, and will not be able to get all the orders to the forge until early November anyway, and partially because we confirmed that we can extend slightly longer than the original cut off date, I am pleased to advise that we have been able to extend the current batch order period to the 4th of November.

So for those of you who needed just a little more time to either set aside the required funds or take their time to ensure the design is just right, now you have it!

From the emails I have been getting the last couple of months THIS is the blog post announcement that many of you have been waiting for..

The order period will only be from the 17th of October to the 29th (we need to keep it short to ensure we don’t run into the shutdown for Chinese New Year) so don’t put it off, it is only a 12 day window of opportunity and once it shuts, it will not be until this batch comes in in February that we will be offering another chance to get one of these fantastic swords (honestly, we really should increase the pricing on these – right now we only just break even, and treat the $500 swords as $1000+ blades with the two levels of quality checks we apply to this line).

Just a quick update on the SBG Custom Katana for everyone – Batch 41 finally cleared customs and is en route to the sorting and inspecting team. There has been a bit of an unexpected hiccup – the swords were shipped from the forge in 3 boxes and somehow they all got separated and cleared customs at different times, but the reason for the delay right now is that 2 of the 3 boxes were sent to British Columbia instead of Manitoba, which if you are familiar with Canada is over 1,000 miles in the wrong direction..!

They are being re-routed and should arrive early this week – however the sorting, inspecting and shipping team don’t rush things and ensure each sword is thoroughly inspected for any defects, incorrect customizations and other QC issues before final packing and sending, so it is likely that the swords will not go out into early October.

As soon as possible after we confirm that the swords are all in, we will open up on new orders again for batch 42 – which will be the second and FINAL batch for 2017 (And Batch 43 will be delayed by Chinese New Year, so after batch 42 closes, the next batch may be 4-5 months away).

I will do my best to update everyone here as soon as I get confirmation that all the swords are finally in and the team commences the inspection process. In the meantime, thanks to everyone either waiting on a sword from batch 41 or waiting for batch 42 to open up for their patience.

Right now we have about a month to go before batch 41 of the SBG Custom Katana is due. And the good news is that the forge has ALMOST completed this batch and (fingers crossed) if everything goes smoothly completing the last few swords and customs does not mess us around too much this time, there is a reasonable chance that this time we may be on track for delivery on or even slightly ahead of schedule.. (though I may regret saying that! As I said, fingers crossed).

I have just sent out an email update to all the people who are waiting on this batch, but in the meantime will share a couple of cool pics with you from the forge showing the swords in various stages of completion. 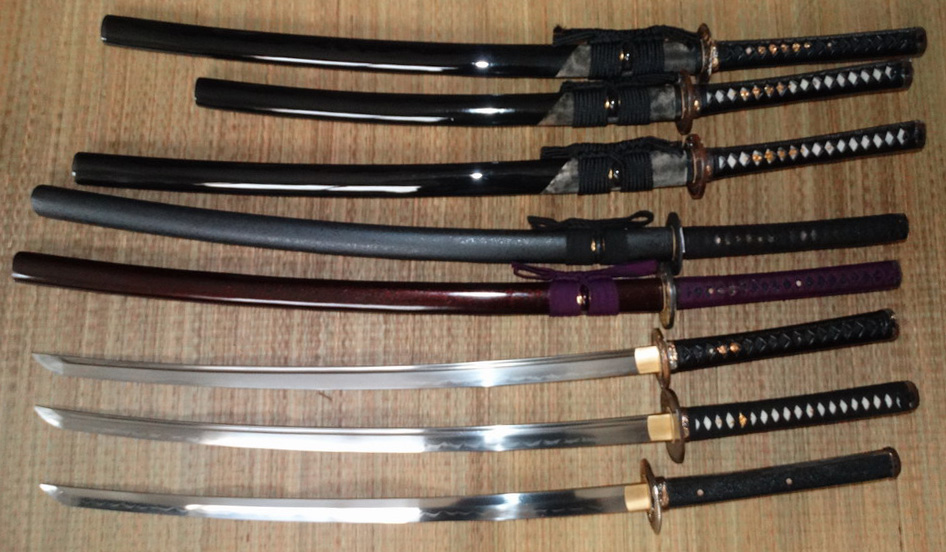 The two swords one down from the top with black leather and rayskin saya are a Daisho set, and each one of the blades here have either complex Kobuse or Sanmai laminations, which is GREAT news as these are the ones that take the longest to make..!

The saya are not yet completely dry on some of them due to seasonal rains in Longquan – and so curing the wood is taking longer than usual and slowing the whole thing down. And the one right at the bottom is awaiting its ito wrap – so excuse the sword nudity..!

Since everything is going relatively smoothly, batch 42 should also be on time to take new orders once the swords are all shipped and the forge are busy twiddling their thumbs. So will update you on that again in due course..!